The Lord-Lieutenant of Ross and Cromarty is Mrs Joanie Whiteford. Mrs Whiteford was appointed in July 2019 and succeeded Mrs Janet Bowen CVO.

The Lord-Lieutenant of Ross and Cromarty 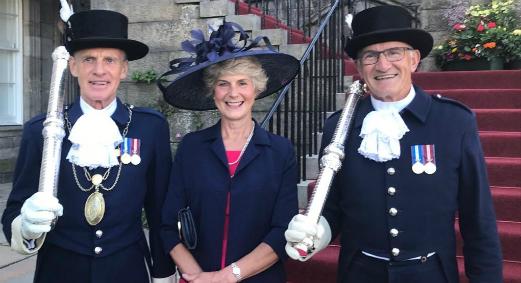 Scottish Lord-Lieutenants are appointed by The Queen, on the advice of the First Minister for each area of Scotland (apart from the cities of Aberdeen, Dundee, Edinburgh and Glasgow where the Lord Provosts are ex-officio Lord Lieutenants).

The Lord-Lieutenant represents the Queen in the county. The role is unpaid and like the Monarch, is essentially non-political. The office of Lord-Lieutenant is of military origin and dates back to the time of Henry VIII when they were appointed for the maintenance of order and for military purposes relating to local defence. Their military role has largely disappeared, but links are maintained by association with Volunteer Reserve Forces. They are also connected with other uniformed organisations such as the Fire, Police and Ambulance services and many local voluntary bodies, also The Cadet Forces and other youth organisations. Lord-Lieutenants have long been associated with the magistracy but, in Scotland, this direct association ceased in 2007.

The Lord-Lieutenant seeks to promote a good atmosphere and a spirit of co-operation by encouragement given to voluntary service and to benevolent organisations, and by taking an active interest in the business, industrial and social life of the County and the voluntary activity that goes on in it.

The area covered by the Lieutenancy stretches from Skye in the west to beyond Ullapool in the north and to Cromarty and Tain in the east.

Map of The Lieutenancy area. 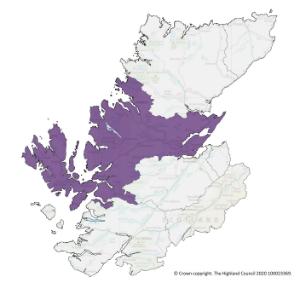 The Clerk to the Lord Lieutenant of Ross and Cromarty is Iain Swayne, Highland Council.
The main support to this role is provided by Adeline Allan .

Honours lists are published twice a year at New Year and in mid-June on the date of the Queen's official birthday. Anyone can receive an award if they reach the required standard of merit or service, and honours lists contain a wide variety of people from different backgrounds, communities and organisations. Anyone can nominate someone for an award. The honours system is administered by the Government and you can obtain more information by visiting the The Honours system - gov.scot.

If you have any queries about the honours system or how to nominate someone, please contact the Clerk to the Lieutenancy.
The main support to this role is provided by Adeline Allan.

On the occasion of the 100th birthday of an individual or the Diamond Wedding Jubilee of a married couple The Queen will send a signed greeting and message of congratulation.

If it is the wish of the family it is possible for this message to be personally delivered by the Lord Lieutenant, or in the case of her non availability by one of her Deputy Lieutenants, as a representative of the Queen. This visit will be brief and not intrusive, and a number of people have commented that such a visit does add to the day.

If you would like to arrange a visit please contact the Clerk to the Lieutenancy.
The main support to this role is provided by Adeline Allan .

If you have any questions about work of the Lord Lieutenant and Deputies, please contact the Clerk to the Lieutenancy.
The main support to this role is provided by Adeline Allan .