The completion of the first phase of Inverness’s West Link road was marked by an opening ceremony and convoy of vehicles at 09:30am which opened the link between the A82 and the Dores Road.

A ribbon on the new Holm Mills bridge was cut by pupils from two local schools, Holm Primary and Kinmylies Primary, assisted by Provost of Inverness Helen Carmichael and senior members of the Council.

Provost of Inverness, Helen Carmichael said: “It is a very important day for many of you who have been involved in the decision-making, planning and delivering of this very significant project for Inverness and the Highlands.

“It was very exciting to open the road and it will bring so many benefits, including reducing congestion and pollution in our city centre. My thanks to everyone involved in getting us to this special day.”

She added: “We have some very special guests here today with us. We have eight pupils from Holm Primary and Kinmylies Primary with their Head Teachers Janine Webb and Fiona McKellar. Thank you especially to Roddy MacLennan and Kelsey Campbell who helped to cut the ribbon and open the road today,  in what is an historic moment,  which I am sure they will always remember and can tell their own children and grand-children about in years to come.” 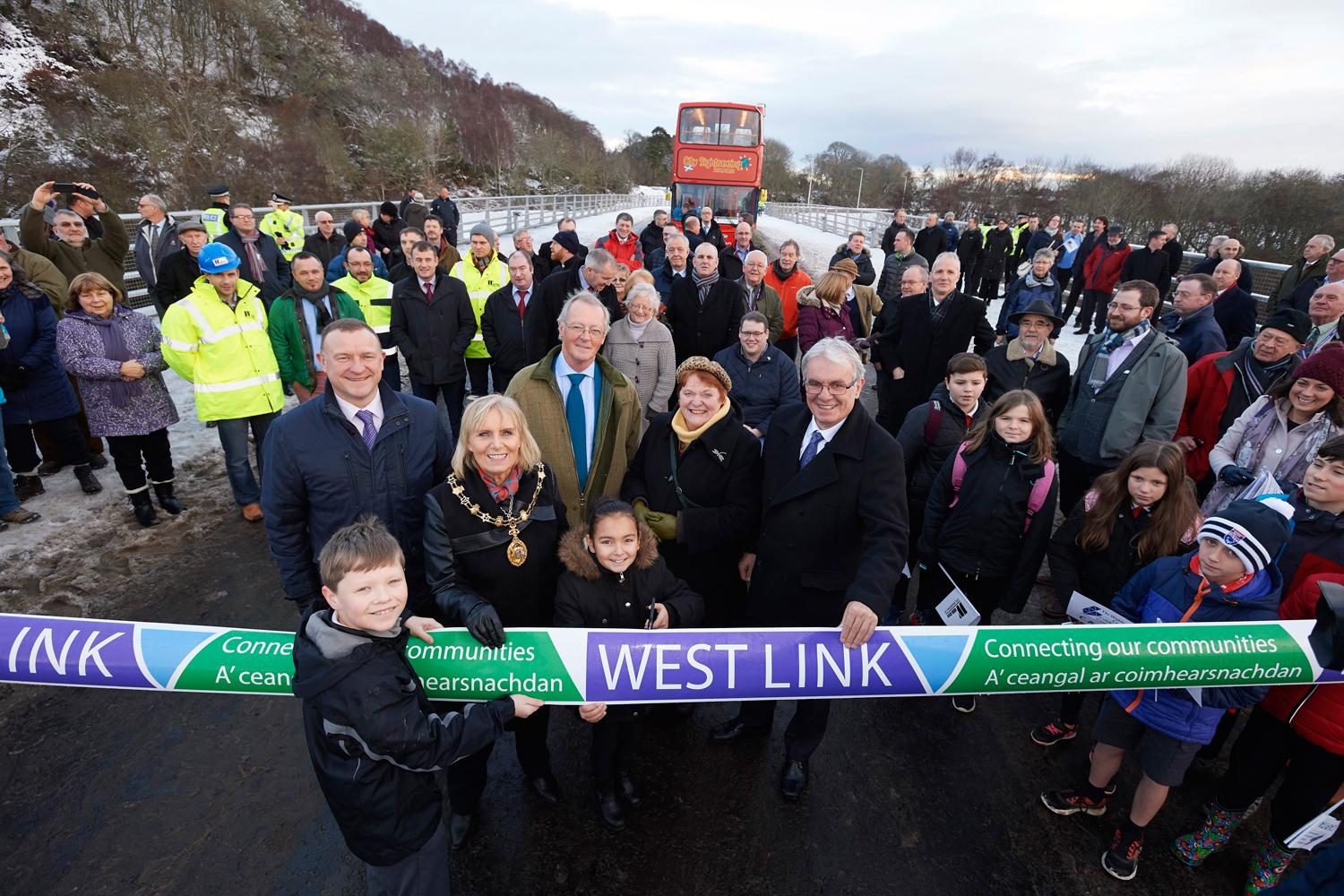 Chair of the Environment, Development and Infrastructure Committee Councillor Allan Henderson  said: “The West Link project dates back to the late 1960s when concept of peripheral route on the south side of Inverness was first tested.

“Now at long last, after many decades, the West Link is now a reality - delivered on time, and on budget!

“As with any major project, developing community, political and statutory consensus on the route - and funding -  is a large part of the battle.

"Success was in part down to cross-party support, extensive public consultation, an innovative working group and an enthusiastic Consultancy design team who managed the process, developed the final route and producing the detailed designs that have transpired into the wonderful bridge, roads and sporting facilities here today.

“The West-Link will bring numerous benefits to the area, including reducing journey times and distances for many – for example, children from Holm Primary now have a much shorter route to get to the Aquadome or the Ice Rink.  People from Lochaber with hospital appointments can get to Raigmore Hospital much more easily, without going through the centre of Inverness.  Students from Kinmylies will be able to get to the college at the Inverness Campus in a much more direct way.

“The route will therefore significantly reduce congestion and pollution in the city centre.

“The scheme is also enabling housing development and associated developer contributions. In fact, the Benefit to Cost Ratio of the West Link project is 3.86, which represents nearly £4 of benefit to every £1 of public investment.”

Stage 2 of the West Link project is programmed to commence in 2019 and will be completed in 2020 following the relocation of the golf course and building of a second swing bridge.

The £55 million West Link project forms part of the Inverness and Highland City-Region deal which is a joint initiative supported by up to £315 million investment from the UK and Scottish governments, Highland Council, Highlands and Islands Enterprise, and the University of the Highlands and Islands, aimed at stimulating sustainable regional economic growth.