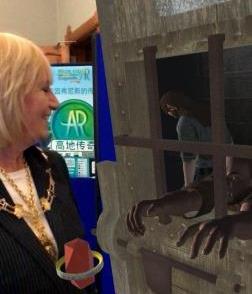 Provost of Inverness with "Prisoners"

A series of plaques depicting local legends and historic events have been installed at various locations across Inverness, forming the first augmented reality trail in the UK.

The artwork on the plaques acts as a trigger for the new HighlandAR Legends app which uses augmented reality to bring a story to life in 3D in your surroundings.

The app has now been downloaded 1000 times and there have been 4000 visits to the HighlandAR website.

This app “HighlandAR Legends” is part of a Council project under the City-Region Deal. Communications and Resilience Manager Ruth Cleland who is leading the project said: “HighlandAR Legends is a global, mobile app which you can download from Play stores. The app uses augmented reality to bring the legends and history of Inverness to life. The artworks and the app will provide a rich new experience for visitors to Inverness and also brings wider economic benefits and income generation opportunities to the Council. Work is also underway to produce a Chinese version of the app, funded by the City-Region Deal.” 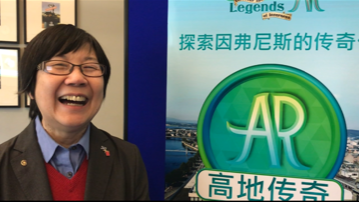 Provost of Inverness, Helen Carmichael said: “I am delighted to see these stunning artworks installed around Inverness. It is a wonderful and exciting new way of telling the stories and legends of our city which is rich in culture and history. The app brings these artworks to life in such an amazing way and I am sure people will love it! This is a tremendous way of attracting international visitors, helping to boost the local economy in Inverness and the Highlands.”

The Inverness Common Good Fund provided funding for the artworks which were designed by local artists and the Council’s Graphic Designer Kirsty Foster. Darroch McNaught of Deuxality created the HighlandAR app and augmented reality experiences.

The app HighlandAR Legends can be downloaded from Google Play and the Apple App Store. You can find out more about the new app and where the artworks are located and the history behind them at www.highlandar.co.uk

The Highland city-region deal is a joint initiative supported by up to £315M investment from the UK and Scottish governments, The Highland Council, HIE and University of the Highland and Islands, aimed at stimulating sustainable regional economic growth.

This article was published
3 Oct 2018