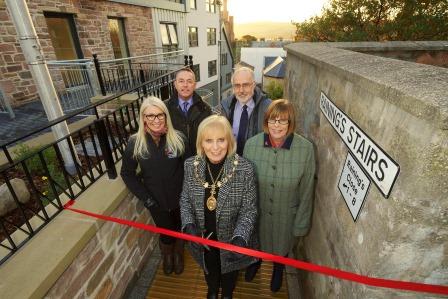 The regeneration of a landmark area of Inverness is now complete.

Provost Helen Carmichael officially opened the transformed Raining’s Stairs earlier this week (30 October), marking the completion of a project to rebuild the historic steps and build 16 new affordable homes for the Highland Council and the Highland Housing Alliance.

Speaking while cutting a ribbon at the top of the development, Provost Helen Carmichael said: “The Highland Council would like to thank everybody involved in this project which has transformed and regenerated a derelict area providing the highest quality affordable housing whilst creating an extremely attractive entrance to the city centre.  The collaborative approach between the private sector, through Ark Estates, the Scottish Government, the Highland Housing Alliance and the Highland Council has overcome all the obstacles to deliver an exceptional project on one of the most difficult sites in Inverness.”

The project developed derelict land on the right of Raining’s Stairs, and involved the construction of 16 one and two bedroom flats and a small retail unit.  Six flats are available at an affordable rent from The Highland Council with ten flats available at a mid-market rent from the Highland Housing Alliance. Named after John Raining, the founder of the school which was built at the head of the Stairs in 1747 before being amalgamated with the Royal Academy in the 1850s and then demolished in the late 1970s, the Stairs connect the Crown area to the city centre.

William Gray of project developer Ark Estates, said: “We are delighted at the successful completion of what has been one of our most challenging projects. This was a very difficult site to build on and it’s testament to the skill of everybody involved that it has worked out so well. We’re really proud of the end result, as well as with the commitment shown by everyone on the team which has been truly exceptional. Their hard work has helped us create what I’m sure will prove to be a real legacy project for Ark Estates.”

Builders William Gray Construction also completely reconstructed the steps of the Raining’s Stairs as part of the project, with many of the old granite steps repurposed as coping stones on the retaining walls of the new flats.  The walls to the left-hand side of the steps have been smartened up and improved lighting installed.

Gail Matheson, chief executive of Highland Housing Alliance, said: “Highland Housing Alliance is delighted to see this iconic development completed, adding to our portfolio of mid-market rental homes.  This has only been made possible with the support from the Scottish Government, The Highland Council and City Region Deal funds.  The homes have regenerated not just a derelict site but a main route through the city centre – the flats have fantastic views and our tenants are delighted with them.  Our development partners, Ark Estates and William Gray Construction, took on a very challenging development and have delivered brilliant homes in a city centre location.”

Funding for the residential flats was provided by The Scottish Government, Highland Housing Alliance and The Highland Council.  The Council contribution includes funding from the Landbank Fund, the Inverness City Region Deal and investment available to the Council through Prudential Borrowing.

This article was published
1 Nov 2018