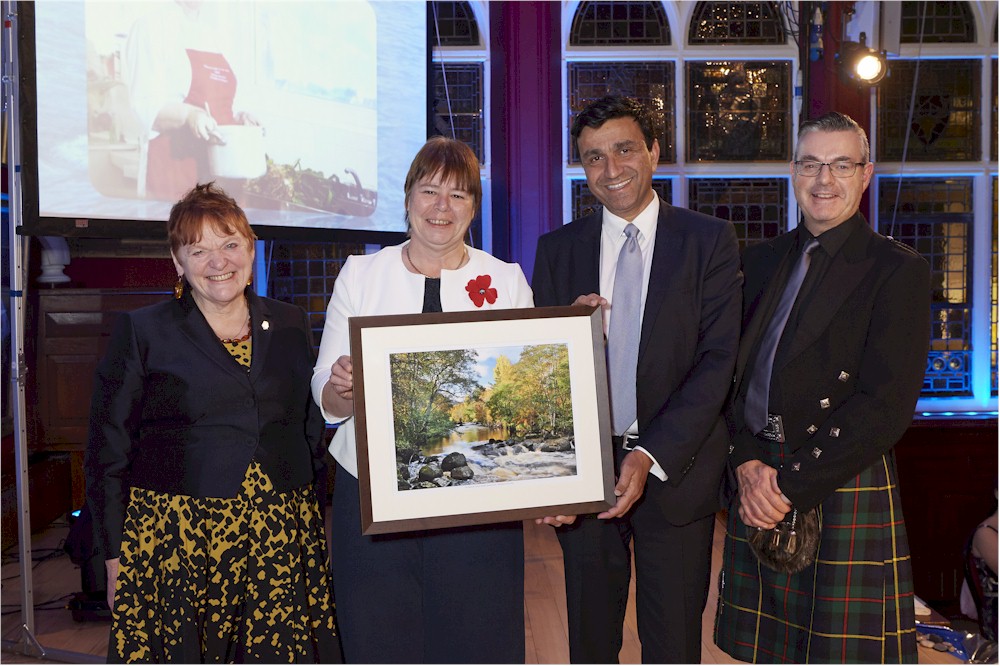 Annette Burfooot, who has been at the school for 11 years, is described as a skilled and dedicated member of staff who is passionate about promoting healthy eating and regularly goes into classrooms to chat to the children about nutrition and developing healthy eating habits. She also encourages them to proactively get involved in the planning of menus for school meals making the most of fresh herbs and vegetables grown in the school garden.

With the encouragement of the Council’s catering service, earlier this year Annette entered the annual Scottish national competition, Scottish School cook of the Year. She won the Highland heat and then went on to compete with cooks from throughout Scotland and came away with the runner up award.

Before competing, Annette consulted and trialled menu options with primary 6 and 7 pupils who helped her select the mouth-watering menu she put forward. All the fresh vegetables, herbs and fruit used in her award winning dish that impressed the judges were grown by the pupils. After attending the award ceremony she laid on a party with lots of tasty treats to personally thank pupils and staff for all their help and support.

Catering Services Manager Sue Nield who nominated Annette for Employee of the Year said:  “Annette’s proactive role within her school is the very heart of what our school meals are all about. Her relationship with staff and children is inspirational. With her encouragement, pupils are eating and enjoying a wide variety of foods. One of the favourite vegetables on the menu is kale - it’s the way she cooks it and crisps it up which the pupils love! She is always willing to do the best that she can in supporting her school and the whole community.”

One parent added: “I’ve seen first-hand the passion Annette she has for cooking healthy balanced meals and how much she cares about all the children getting a good meal. She is a credit to her profession and to Broadford Primary.”

Annette was presented with her award by the Leader of the Council, Cllr Margaret Davidson and Manish Garg from WIPRO at a ceremony held last night in Inverness Town House. The Awards, sponsored by Viridor, Tusker, E-On Energy, Hub North Scotland, Morrison Construction and WIPRO were hosted by STV news presenter Norman MacLeod.

Lorna has been a Tenant Participation Officer for the past ten years covering Caithness, Sutherland and Easter Ross. Throughout this time she has worked tirelessly to involve tenants in the Housing Service.

Mandy Macleman, the Council’s Principal Tenant and Customer Engagement Officer who nominated Lorna said:  “Lorna’s tenacity, patience and support has been inspirational to the tenants she works with.”

Reflecting the high esteem she is held in, Lorna has been nominated by her tenants for the National Tenant Champion award which will be presented later this month.

Roseann Christie is renowned throughout the Care and Learning Service as a passionate and committed supporter of children and families.

Derek Martin, Care and Learning Manager who nominated her said: “Roseann is widely respected across the Service.  She is approachable and has excellent working relationships with Head teachers and other school staff and plays a significant role in assisting with the return of children who have been living in placements outwith Highland and has a very successful track record of creating bespoke packages that enable young people to return, to live and learn in the area that they come from.”

Communities across the Highlands were invited to nominate Council staff who they felt deserved special recognition and the first Community Award of the evening went to Tom Grant, a leisure assistant at Lochbroom Leisure in Ullapool. As well as coaching swimming to all ages, he also, as a volunteer, runs a popular swim club teaching children to be safe, happy and confident in the water. Last year the Club won their first competition medal in a long time – giving the young competitors a real boost. Tom has also been looking beyond the pool and thanks to his enthusiasm and skills there is now a thriving network of wild swimmers in the Ullapool area. In March the antics of Tom and his colleagues became a surprise internet hit when they “swam” through deep snow that had accumulated on the tennis courts. The stunt raised £2,800 to support the local swimming pool.

Lochbroom Community Council who nominated him said: “Tom doesn’t just do a great job of encouraging and inspiring the people he comes into contact through his work and his volunteering, his infectious enthusiasm and energy is a positive influence on the wider community. We want him to know much we all appreciate him.”

Lenny Choat, the Village Officer in Beauly was nominated by the local Community Council who praise him for his hard work and for undertaking his duties with pride, going out of his way to improve the general appearance of the village and working closely with the various groups that give Beauly its vibrancy.

Secretary David Taylor said: “Lenny has a very positive and constructive approach to his work. He gives good advice and does an excellent job. Nothing is too much trouble. Beauly is lucky to have an individual who does the job so well and with enthusiasm and pride. He is a friend of our village and we all value his dedication and hard work.”

The final Community Awards went to the Sutherland based Refuse Collection Team of Mark Robertson and Donald Mackay who were nominated by Strathy and Armadale Community Council for the excellent job they do. The Community Council highlighted the little extras Mark and Donald do that make a difference. Of particular note is the work the team do in collecting waste from popular local viewpoints, laybys and from Strathy Cemetery car park. During the summer these bins are often overflowing and the team not only empty them but work hard to collect the loose rubbish. The community council said: “We would like Mark and Donald to know that their efforts are appreciated within the whole community.”

The 2018 Team of the Year award went to the Council’s Mental Health Representative Team.

Two years ago the council-wide corporate team of Mental Health Representatives was set up to provide front line support to colleagues experiencing mental health problems. There are now 58 Mental Health Reps from all Council Services geographically spread across the Highlands who have volunteered to carry out this important role in addition to their normal duties.

The impact that the team has made has been immediate and significant. Since the official launch in January last year, they have supported over 100 colleagues to find appropriate mental health services. This early intervention has greatly improved people’s chances of early recovery and reduced the likelihood of absence from work.

As well as supporting their colleagues and having such a positive impact on the wellbeing of staff, this team of committed volunteers play a wider role in the community by raising awareness and reducing the stigma associated with mental health issues.

The Highland Council’s 2018 Trainee of the Year Award went to Drew MacBeath who joined the Council’s Human Resources hub within the business support team in December last year as a Modern Apprentice, studying for a SVQ3 in Business Administration.

Carol Campbell, Mentor to Modern Apprentices said: “Drew has proved to be a fantastic addition to the team even in the short time he has been employed by the Council.  He shows real depth of character, initiative, motivation, and encourages those within his immediate work group.  Drew is a very happy individual and his bubbly nature coupled with his great work ethic has had a massive very positive effect on everyone he works with.”

Teams of Council staff were invited to enter projects into four categories and all short-listed entries were assessed by an independent judging panel. During the Award Ceremony, the four category winners were announced. The winning team projects for the following categories were:

Making the Highlands an Even Better Place to Live
The Council’s Historic Environment Record Online (HERO) project to develop an interactive website that gives easy access to information, photographs, illustrations and reports for over 50,000 archaeological sites, historic buildings, battlefields,  designed landscapes and other sites of cultural importance.

Making Highland a Welcoming Place where People Succeed in Life and Business
The Delivery Law website project. Internet delivery surcharging is one of the most common topics of complaints received by the Council’s Trading Standards team.  After much success tackling online sellers on a case-by-case basis, this project takes the work to the next level by using a concerted and collaborative national approach to achieve a wider range of objectives, through the creation of a “one-stop-shop” delivery law website, www.deliverylaw.uk .

Delivering Efficiency, Earning Income and Improving Services
The Highland Council and Department of Work and Pensions project to co-locate to Caithness House in Wick. This joint venture has brought Jobcentre Plus alongside the Council’s Service Point, Welfare Support Service, and other service delivery teams, in modern offices, delivering more efficient use of space and other resources, strengthened partnership working and significantly improved accessibility to more ‘holistic’ services for local residents.

The 2018 Outstanding Partnership Award went to Nairn Academy’s Additional Support Needs Bronze Duke of Edinburgh Award project. The school is the first mainstream school in Highland to deliver a Bronze Duke of Edinburgh to children with Additional Support Needs. Two groups of pupils have successfully taken part . The skills they have learnt have helped improve their self-confidence and independence and has seen them volunteering and engaging with the wider local community.

Speaking after presenting the Convener’s Award, Councillor Bill Lobban congratulated all staff and thanked them for their hard work.  He said: “There is a lot of excellent work taking place which is not only achieving significant financial savings to the Council, but is leading the way nationally and reinforcing our reputation across Scotland as a forward-thinking and very pro-active local authority. Your energy, professionalism, skills and the great enthusiasm for the work you do is greatly appreciated by us all.”

Council Leader, Margaret Davidson drew the event to a close by praising staff.

She said: “Congratulations to each and every one of you for all your tremendous work. It really has been heartening to hear how everyone is pulling together and putting such energy, expertise and enthusiasm into their jobs.

“Tonight has been the ideal opportunity to shine the spotlight on the high quality services being delivered.  I strongly believe that we are one of the most inventive and efficient Councils in Scotland and the strength of our performance lies in the quality of the people who work for us. Your commitment, skills, experience and good-will makes things happen and the Council, and our communities, are all the better for your hard work and drive.”

This article was published
9 Nov 2018