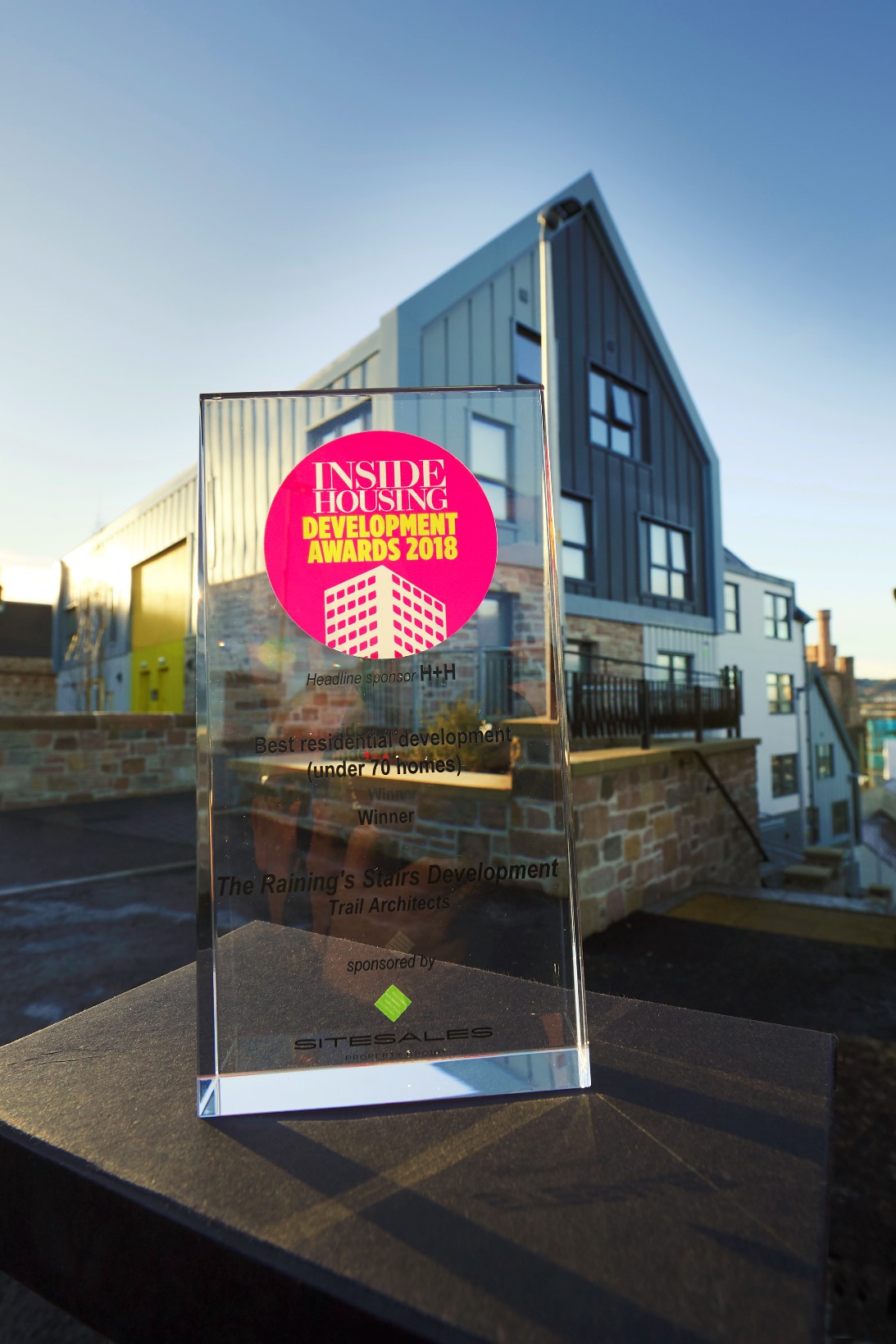 The Raining’s Stairs development in Inverness has won a prestigious award for the Best Residential Housing Development in the UK.

The annual awards organised by the main housing magazine in the UK, Inside Housing, saw the Raining’s Stairs fend off entries from all across Britain to win the coveted Best Residential Development (under 70 units).

The development was shortlisted in 3 categories, and  the team were delighted to win the acclaimed Best Residential Development at the Inside Housing Development Awards.

Funding for the 16 residential flats was provided by The Scottish Government, The Highland Council and the Highland Housing Alliance.  The Council contribution includes funding from the Landbank Fund, the Inverness City Region Deal and investment available to the Council through Prudential Borrowing.

Kevin Stewart, Minister for Local Government, Planning and Housing said: “I am delighted that this project has won such a prestigious award.  I visited the development over the summer and saw the transformation of the site and the vision everybody involved had for the end product.  This highly ambitious project showed the importance of partnership working to deliver this new housing and with nearly £1.5 million in grant support, shows the commitment by the Scottish Government to delivering affordable housing in locations where it is most needed.”

Provost of Inverness, Helen Carmichael who cut the ribbon to officially open the new development on the 30th October 2018 congratulated the team on their success.  She said: “The transformation of this derelict site in the heart of the city centre has been incredible. It has really regenerated the whole local area. I am delighted that the exceptional work of everyone involved has been recognised at such a high profile national level as it has been a real team effort. What struck me when I was taken on a tour of the new homes was the high quality of the workmanship, how they have been designed to have lots of natural light and how they make the most of the stunning surrounding views. Importantly the Raining Stairs themselves have been completely rebuilt to a very high standard so these historic set of steps that form a core path through the city of Inverness can continue to be used for many generations to come.”

During the project the old granite steps were reused as coping stones on the  walls around  the new flats.  The walls at  the steps have been refurbished and improved lighting installed.

William Gray of project developer Ark Estates, said: "Raining’s Stairs was the most challenging site Ark Estates has ever developed, and to say we are happy with the outcome is a huge understatement. The combination of the high profile city centre location opposite Inverness Castle, the severely restricted access and the steepness of the slope (27 metres of vertical drop between Crown and Castle Street) made every design decision critical. The individuals who worked on the site throughout this project - and their dedication and determination - are the reason it has been such a success, so I’m delighted to see them getting the national recognition they deserve.”

Gail Matheson, CEO of Highland Housing Alliance said, “The project reaffirms that Inverness provides eye catching, well built homes for city centre living.  The type of housing delivered is both mid market rent and affordable rent, meaning that the project has delivered homes for families to attract them back into the city centre and back to Inverness.  HHA and The Highland Council have worked together to provide a mix of housing to meet various demands.  This builds on the successes of other projects delivered by HHA, the Council and William Gray Construction (now known as WGC Scotland Ltd) which have seen other sites around the city centre regenerated.

The development has also been selected as a finalist in the Scottish Property Awards for Regeneration Project of the Year.