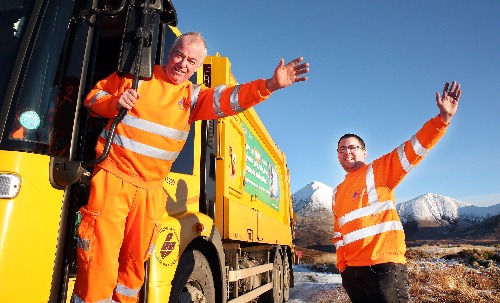 Two binmen carrying out their work on the Isle of Skye prior to the New Year have been recognised and commended by a local councillor for their attentiveness and quick intervention to ensure the safety of an elderly resident.

Ronnie Reid and Kenny Gillies were travelling in a refuse lorry in Ardvasar, Skye in very cold conditions, when – with assistance from the height of the vehicle – Ronnie spotted something to his near side and alerted Kenny.  They reversed the lorry and found an elderly gentleman had fallen over an embankment and was in early stages of hypothermia.

The Highland Council operatives immediately alerted emergency services, contacted the gentleman’s family and remained with the casualty,speaking to him until his son and medical assistance arrived and he was transferred to hospital.

Praising the actions and compassion demonstrated by both Highland Council employees, Cllr John Finlayson, who represents the Eilean a' Cheò Ward, said: “Clearly the most important thing is that Seoras is recovering in hospital which is down to the alertness and quick thinking of Ronnie and Kenny, which certainly ensured that a positive outcome came of what could have been a tragic situation. I personally would like to thank them for what they did and also thank all our employees on Skye and Raasay, for their support over the festive season as well as in recent months.  I have received many communications from members of the public highlighting a number of situations where workers have gone beyond their contractual obligations to help people in the community.”

This article was published
7 Jan 2021