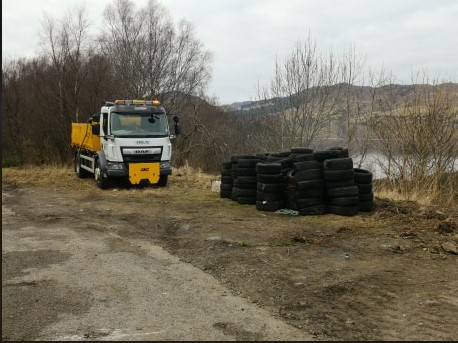 Highland Council has said that illegal fly-tipping is costing the region’s taxpayers thousands and is encouraging people to report anyone they see doing it.

Council operatives were alerted to an incident of fly-tipping at the Attadale Estate on the A890 at Strathcarron, where 153 tyres were dumped at the side of the road.

In another incident at the weekend, a waste cassette from a camper van, or caravan, was dumped at a school site in Lochaber requiring an extensive clean-up.

Illegal dumping happens in both rural and urban areas and, clearing it up, costs Scottish local authorities more than £2.5 million each year. The incident in Attadale is estimated to have cost Highland Council approximately £2,143.

Not only is fly-tipping an offence, but there is no excuse for it anywhere in our region, as the Council provides 21 recycling centres across the Highlands and offers a bulky uplift service for large items.

At the end of the day, it is Highland Council taxpayers who are bearing the cost of the Council having to clean up and send our staff to investigate.

The COVID-19 pandemic has already placed extra pressure on budgets and positive action to combat this illegal practice would provide the Council with an opportunity to re-direct that spending towards other vital services.

Communities and Place Area Committee Chair, Cllr Allan Henderson, said: “I urge everyone to use the waste collection services the local authority offers and to dispose of waste or unwanted items responsibly.

“The Council works closely with SEPA and Police Scotland to raise awareness of all the implications of fly-tipping.”

He added: “Local communities can help us too.  If anyone sees fly-tipping in their area, we would urge them to report it to us, the Police or SEPA at the time or as soon as possible, along with any descriptions of people or vehicles used.”

Police in Lochcarron are also appealing for information in relation to this issue of fly-tipping in Strathcarron.

Constable Allan said: “Police Scotland is committed to working in partnership with the local authority and partner agencies to tackle the ongoing issue of fly-tipping, which blights our landscape and has a significant impact on our local communities.

“It’s estimated that the cost to remove and dispose this one single incident will run into thousands of pounds."

Its suspected that this has been done over a period of time and police are appealing for anyone who may have seen any vehicles acting suspiciously to contact police on 101, quoting incident number NP 658/21. Alternatively, you can contact the Crimestoppers anonymously on 0800 555 111.”

You can also report incidents of fly-tipping to the council on-line by visiting www.highland.gov.uk

This article was published
9 Mar 2021