At the meeting of The Highland Council, Members heard a presentation on the Highland Confucius Hub by Ann MacKintosh, Principle Teacher of Languages at Grantown Grammar School. The presentation highlighted the key work within the school and key moments from the school’s trip to China in 2019.

Confucius Institute was originally set up to promote educational, economic, and cultural ties by teaching Chinese culture and language across the globe. In Scotland, there are 21 secondary hubs, 19 primary hubs, and 3 specialist hubs. The Highland Hub originally started in 2015 at Kingussie High School and then moved to Grantown Grammar in 2018/19.

Convener of the Council, Cllr Bill Lobban said: “A huge amount of work went into bringing the Confucius Hub to Kingussie in the first place and I was extremely disappointed to see it dropped. I am however delighted that Grantown Grammar stepped in to fill the void and all credit to the staff for having the vision to do so. Building a relationship with China, one of the most powerful economies in the world, is potentially of massive benefit to pupils and the future of Badenoch & Strathspey”.

In 2019, Ms Jinxiu Wang joined Grantown Grammar for 2 years, and was present through the lockdowns. She taught in the associated primaries and worked with S1-3 in the Grammar school, providing basic Mandarin lessons and cultural input including dance, singing, painting, cooking, and sports, as well as getting involved in all aspects of school life.

The school also visited China in 2019 with the aim to introduce pupils to Chinese culture and traditions. This also helped pupils to study for the SQA bridge award at level 4. 10 pupils from 4 Highland schools (Grantown Grammar, Kingussie High, Nairn and Plockton) formed the Highland group and then met with 120 pupils from throughout Scotland.

The trip included language and culture lessons where pupils learned the art of fan making and how to play traditional Chinese musical instruments. The trip also included visits to popular tourist sites such as the Summer Palace, The Forbidden City, Tian’anmen Square, Temple of Heaven, Olympic Park and the Great Wall of China. The group also visited their partner school, Tianjin Wuqing Yangcun No 1. High School, which is where Ms Wang teaches.

During her presentation, Mrs. MacKintosh said: “I was very proud of the group of pupils from Highland that I took to China. They gelled well as a group but were also complimented by all the other adults on the trip about the way in which they included other people in everything they did.

“The China immersion was a huge success for the Highland pupils, all of whom have memories and stories to tell in the future, but also lifelong friends in other parts of Scotland who they would never have met had it not been for this opportunity.”

The successful trip had a big impact on two Highland pupils. One pupil has gone on to study Mandarin at Oxford University and another pupil was awarded a year long scholarship to China. Unfortunately, Covid-19 prevented international travel, however she managed to gain her qualification remotely and worked closely with Ms Wang to achieve this.

You can watch the presentation on the Council's website via webcast. 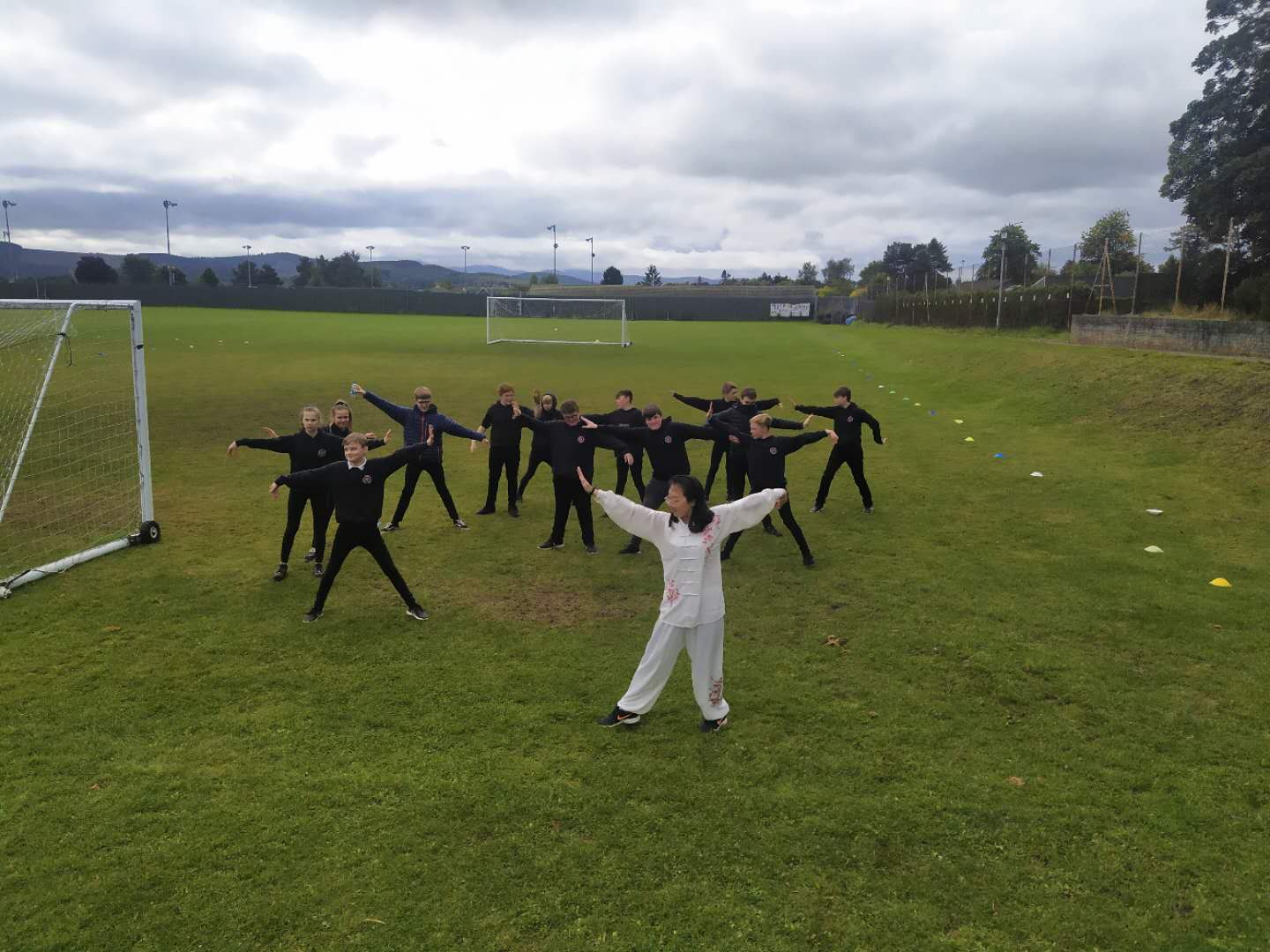 Ms Wang leads pupils in a martial arts session outside