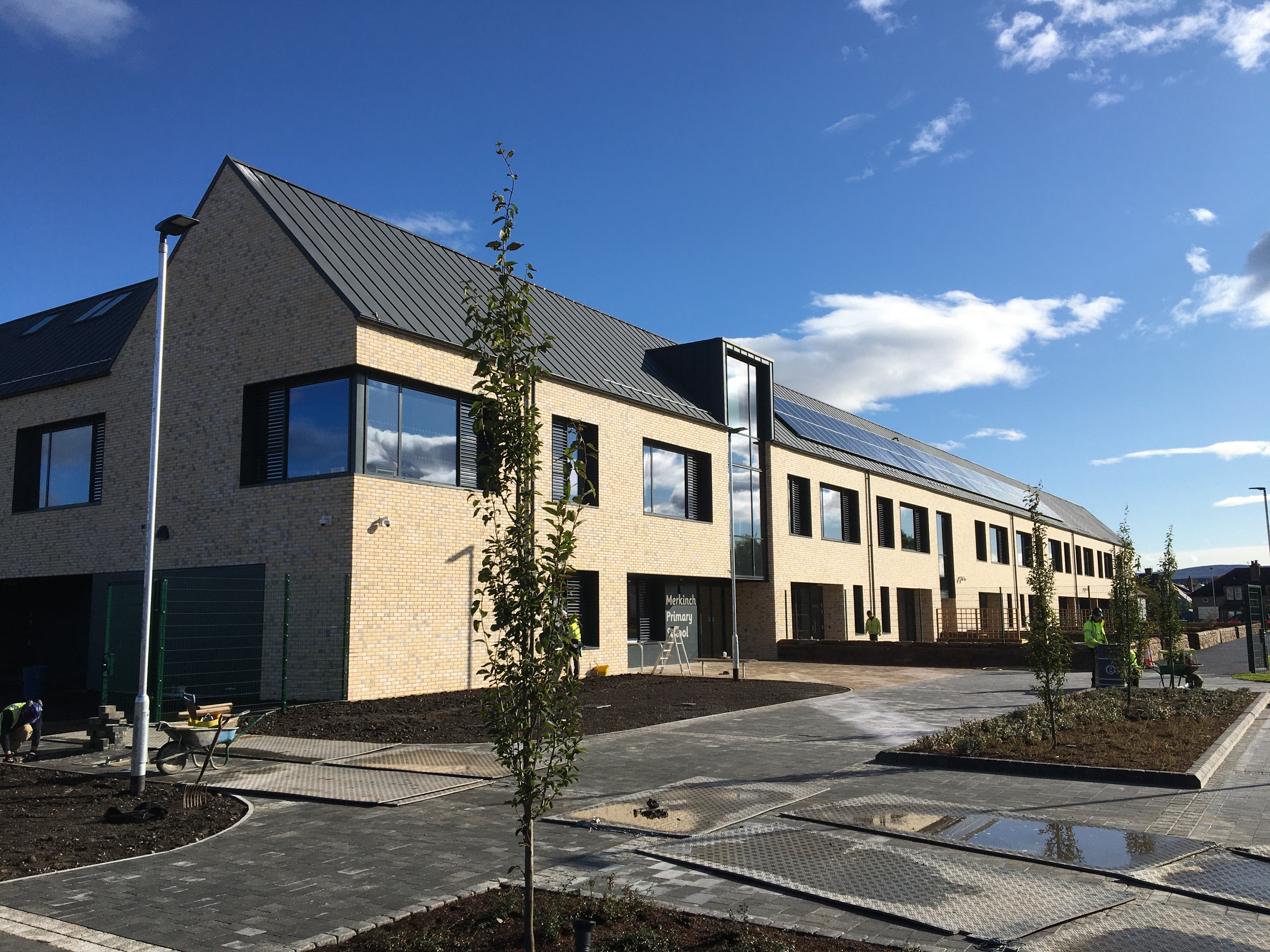 The new Merkinch Primary School and Family Centre in Inverness has won two prizes at a national awards ceremony.

Merkinch Primary School is the first in the Highlands, and largest school in Scotland, to be built using a cross-laminated timber frame (CLT), which is more sustainable than traditional construction methods. The project was delivered by the Council’s in-house Property teams with Robertson Construction Northern as the Principal Contractor.

The Highland Council decided to adopt this approach, instead of a steel frame design, following proposals by Robertson’s, resulting in a 60% reduction of whole-life carbon plus an improved project programme, better thermal performance and a superior internal environment.

The first phase of the project, comprising a new school building, opened in October 2020. The new building includes 14 classrooms, ancillary teaching areas, a three-room nursery to support the delivery of 1,140 hours of Early Learning and Childcare, nurture rooms, and a games hall.

Work on the second phase was completed last month, which saw the refurbishment of the original school building to provide new kitchen and dining facilities for the school and accommodation for Merkinch Family Centre.

The project is funded through the Council’s capital programme with support from the Scottish Government’s investment programme (Scotland’s Schools for the Future) managed by Scottish Futures Trust.

Frank Reid, , managing director Robertson Construction Northern, said: “The recognition The Highland Council has received for Merkinch is well deserved, and we are proud to have played our part in the delivery of this facility as the contractor of choice.  The Council has set a benchmark for sustainable educational facilities, and we look forward to seeing the benefits the facility will bring to the local community, and to continuing our relationship with the Council to deliver sustainable projects which contribute towards a net zero Scotland.”

Vice Chair of the Housing and Property Committee, Cllr Laurie Fraser, said: “It is fantastic to see the Merkinch Primary School project recognised at this level.

“This was a forward-thinking project and a great example of how we intend to approach the future of building in Highland. We are in a climate emergency and the greener we can make our developments the better for future generations.”

The project is part of Highland Council’s #BuildingOurFutureHighland campaign which was launched earlier this year to keep residents and wider public informed on the progress of works for the re-profiled capital programme’s education and Council property projects across Highland.

The dedicated hashtag #BuildingOurFutureHighland will be used on social media to promote the local authority’s completed, ongoing and future building and property projects. The hashtag will help users to quickly locate relevant press releases, photographs, videos and other engaging content for projects on busy social media feeds.

As well as a dedicated webpage and hashtag, an interactive Google map has been created to showcase the scale and progress of works across the region, highlighting the crucial work of officers within the Housing and Property and Education committees.

Head of the Education Committee at Highland Council, Cllr John Finlayson, said: “It is great news to hear of the success of the Merkinch project which will hopefully be used as a template for all the other ambitious plans we have in terms of developing the school estate across Highland.

“The importance of building schools which have a sustainable future is key for all projects that we move forward in the future.”

This article was published
6 Dec 2021