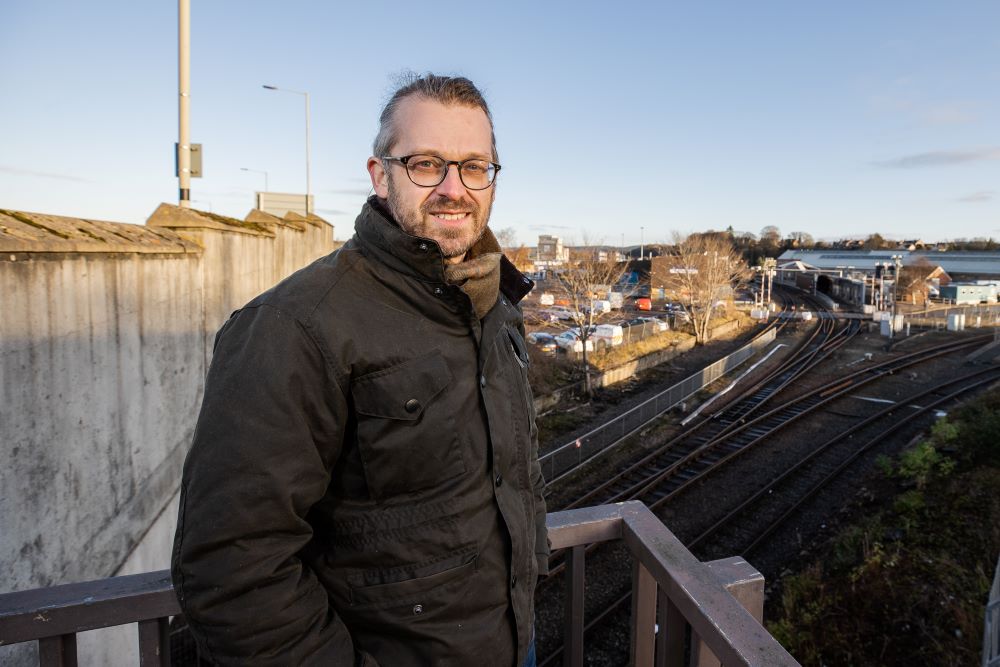 Ian Spencer from H2 Green pictured at the site

Due to Inverness’s location, hydrogen presents a valuable and cost-effective route for widespread decarbonisation of the wider Highland region.

SGN’s former gas holder site on Harbour Road lies between Inverness’s rail depot and industrial area and will provide green hydrogen directly to large volume anchor customers, including rail, bus, and heavy goods vehicles (HGVs). The hub capacity is expected to scale in the medium term to eight tonnes of hydrogen per day, which could service 800 HGVs per day and have the capacity to reduce carbon emissions by 30,000 tonnes per year.

The hydrogen generation can also provide zero-carbon heat and medical-grade oxygen for hospitals, aquiculture and water treatment works in the area.

Inverness is to be the first site developed by the partners after they signed a Memorandum of Understanding (MOU) in January this year to explore the establishment of hydrogen supply hubs across Scotland and England, with 21 SGN sites earmarked for development.

Luke Johnson, managing director of H2 Green, a Getech business said: “We’re excited to be launching our first project with SGN and we’re confident this will have a huge impact on the decarbonisation of Inverness and the wider Highlands region, where transportation has a high carbon cost.

“We’re looking to essentially take a redundant piece of land and bring it back into commercial use as a scalable long term clean energy solution to reduce transport emissions, benefitting the planet and the local economy.”

Ownership of the site will be transferred from SGN to H2 Green and SGN will now prepare the site for development, including removal of the redundant gas holder, planned for Q2 next year. H2 Green will lead the project including detailed engineering design, and they will advance relevant consents, permits and licenses.

Marcus Hunt, Director Commercial Services and Investments at SGN said: “SGN is helping to shape the UK’s energy future through a range of pioneering clean energy projects. Transport represents almost 30% of the UK’s emissions so working with H2 Green to create a green hydrogen hub in Inverness is an exciting opportunity which supports the country’s net zero ambition whilst boosting the developing hydrogen economy.”

Chair of The Highland Council’s Economy and Infrastructure Committee, Councillor Trish Robertson welcomed the announcement. She said: “The Council is delighted that H2Green have recognised the importance of the Highland in the development of Green Hydrogen in Scotland. This development will see Inverness become one of the first cities in the UK to establish commercial production of green hydrogen. The economic and decarbonisation potential of this energy source is enormous, and we’re looking forward to Highland and H2Green playing a leading role in the transition to zero carbon fuel sources.”

Tim Burleigh, Head of External Relations at Eversholt Rail, said: “Eversholt Rail is delighted that this key milestone has been achieved.  We expect Inverness to be a key strategic refuelling location for hydrogen trains operating on routes in Scotland and this exciting announcement by H2 Green will assist in facilitating their introduction at the earliest opportunity.  Our ongoing programme of work with H2 Green will identify further refuelling locations over the coming months.”

Last month, H2 Green signed a deal with Shoreham Port in Sussex to develop a renewable energy hub that will remove emissions from its fleet of trucks and HGVs and be a catalyst for the wider region’s transport decarbonisation.