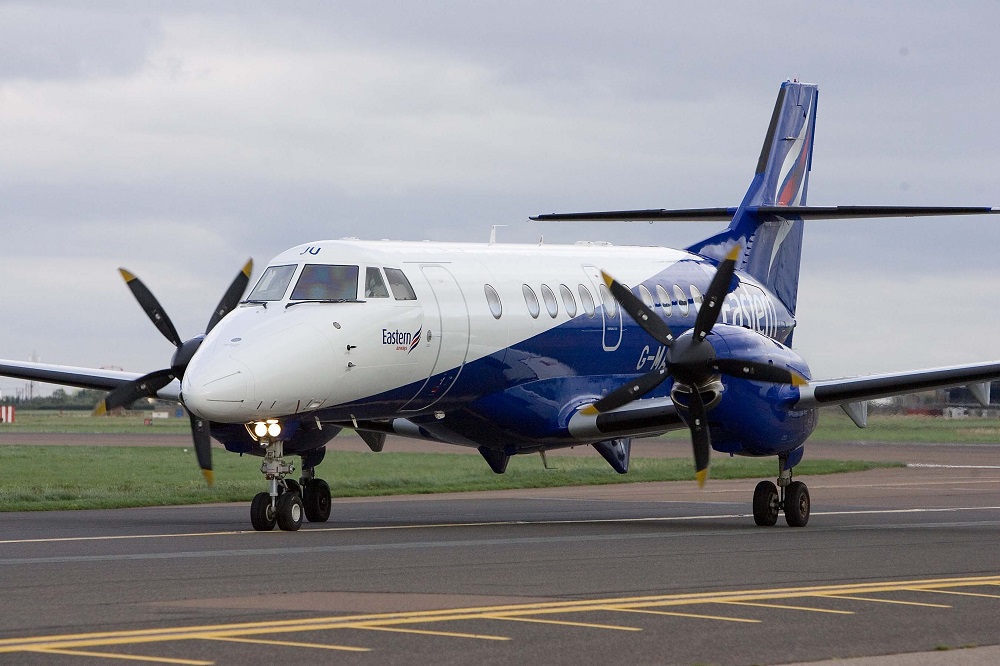 The low emission aircraft that will be used on the route

The Highland Council and Transport Scotland, who have been working with local stakeholders to reinstate flights from Wick John O’Groats Airport, are delighted to announce that Eastern Airways have been awarded a contract to provide a year-round service to Aberdeen.

The service, which will operate under a Public Service Obligation (PSO), will provide a direct connection to the airport hub at Aberdeen for 3 years. It will be funded by £1M from Transport Scotland and £300K per year from The Highland Council.

Eastern Airways will have a phased introduction of flights starting on April the 11th.  Full service will start on the 25th April. Full service includes operating 24 flights a week Sunday to Friday, including 3 Sunday flights, 2 leaving Aberdeen and one leaving Wick. The aircraft will be stationed overnight at Wick from Sunday to Tuesday to provide the community with early morning flights to Aberdeen leaving at 7.20am.

Fares will start from £39.99, which will include 10kg Carry-on luggage and 15Kg in the hold. Bookings can be made at www.easternairways.com

The Leader of the Highland Council, Cllr Margaret Davidson is delighted that tickets for the new service are now available and businesses, residents and the many visitors to the area are all set to benefit from enhanced connectivity. She said: “This is terrific news not just for Caithness but for the whole Highlands. Caithness is very much at the fore of expanding the development of future opportunities in sectors such as renewable energy and space. With these new opportunities comes not only supply chain benefits to the local economy but also inward migration and the creation of high value jobs.

She added: “I had a tour of the airport recently and was very impressed with what I saw. It is all about delivering best value. As a council we could not have afforded to cover the costs of the service ourselves, so we are very grateful and thank the Scottish Government for their help.”

Minister for Transport Jenny Gilruth said: “I welcome the announcement of the award of this contract which will see the restoration of important connectivity for Caithness.

“This service will benefit business travellers and provide visitors with a direct route to experience all that Caithness can offer.

“The Scottish Government is committed to supporting the service both through our direct contribution to the cost of the flights and our ongoing subsidy of Wick John O’Groats Airport.”

Key to the success of the PSO and the successful award of the contract has been close collaboration from a wide number of organisations including the Caithness Chamber of Commerce, HIAL, HIE, Caithness and North Sutherland Regeneration Partnership, Dounreay Site Restoration Ltd, the Nuclear Decommissioning Agency (NDA) and other local stakeholders.

Chair of the Caithness Committee and Chair of the Wick John O’Groats Airport Consultative Committee, Councillor Raymond Bremner paid credit to all the input from the stakeholders and local community to help secure the new service Eastern Airways will be delivering.

He said: “Since the announcement of the cessation of scheduled flights to and from Wick Airport at the start of COVID, many have been working really hard to secure funding for a PSO to support their restart. COVID really didn’t help but the new schedule from Wick to Aberdeen is a welcome start and a great reward for the efforts of everyone who worked to get the PSO in place. The new flight schedule between Wick and Aberdeen reflects improvements on a number of issues that were seen to impact on the pre-COVID schedule, and I really hope that the route will now be supported by businesses and locals to ensure its continued future success. I am certain that having an aircraft based in Wick during part of the week will be a big benefit. On behalf of the Wick John O’Groat Airport Consultative Committee I would like to thank everyone for all their efforts, particularly Malcolm MacLeod and the Highland Council team, in getting this project over the line.”

As well as an economic boom and enhanced connectivity, linked to the route, the reintroduction of flights will boost local employment. The Highland Council will be recruiting a Contract Manager with support from key partners.   HIAL and Eastern Airways are currently recruiting local airport staff.

Adam Wheatley, Eastern Airways Managing Director added; “Helping solve vital regional connectivity is what Eastern Airways have done for twenty five years. Working in partnership with The Highland Council, Transport Scotland and key regional stakeholders connecting again one of the most distant surface transport journeys in Scotland to the hub airport of Aberdeen, in a low emission aircraft fits our belief in how sustainable aviation can meet the need of the UK economy and extensive connectivity into the future.

“We welcome the approach taken by all stakeholders and partners to bring this Wick John O’Groats to Aberdeen air service back and at Eastern Airways we will support the Caithness region in wider accessibility, also adding around 20 new direct & indirect jobs in supporting the service.”