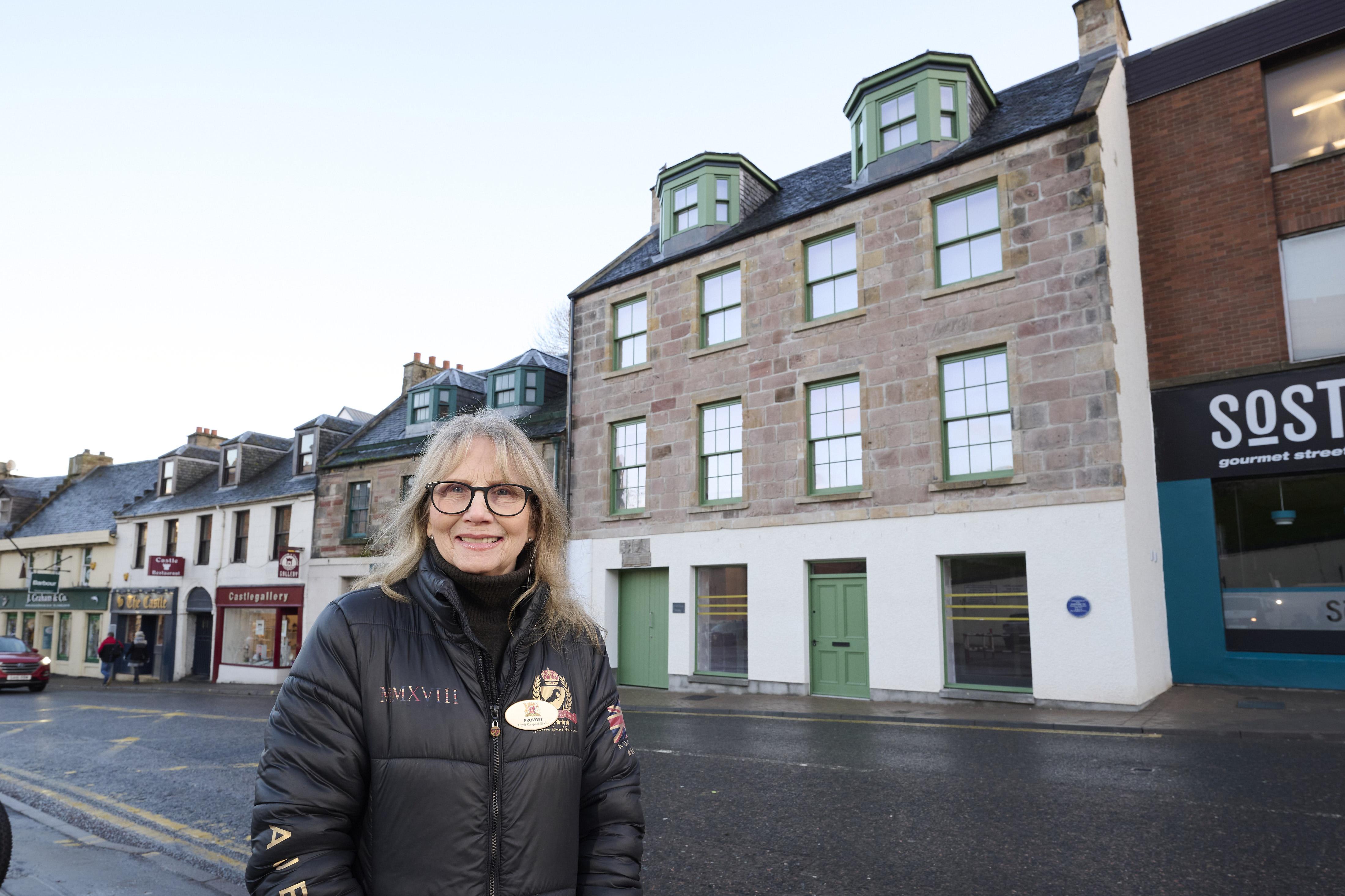 Issued in partnership with HHA

The history of 51-53 Castle Street in Inverness is being celebrated after the sympathetic restoration of the building was completed to create eight new homes and a new commercial unit for the city centre.

Thanks to funding from The Highland Council, City Region Deal and a £1.2 million Scottish Government Partnership for Regeneration grant, the reinstatement of Merchant House on Castle Street has revitalised a building that had run into a state of disrepair over the last decade.

The B-listed building forms part of the historic Castle Street frontage, which overlooks the Castle. As one of the oldest Merchant’s Houses in Inverness, 53 Castle Street was constructed in the early 18th century and was home to a coal merchant who imported coal for the British Government at Fort Augustus.

It was then home to local businessman Colin MacKintosh’s fruit shop whose daughter, Elizabeth, went on to become one of Scotland’s most successful crime writers. Authoring her works under a pseudonym of Josephine Tey, a blue plaque commemorating her has now been installed on the front of the re-developed Castle Street building following a campaign by local writer, Jennifer Morag Henderson.

More latterly, the building was used as part of the Duncan Chisholm & Sons kilt shop, until the family-run firm consolidated its space on Castle Street into smaller units.

To the rear of Merchant House, lies a courtyard that was once used by many families living in Castle Street homes. Contained within the courtyard remains a historic gateway with an entrance to a staircase leading to Ardconnal Terrace.

A historic plaque built into a lintel above the staircase, with the phrase 'FeirGod, dvtnot’ (Fear God, doubt not), etched into the stonework.

Housing and Property Committee Chair and Provost of Inverness, Cllr Glynis Sinclair, said: “53 Castle Street is steeped in history, and it was fitting that this iconic building was restored to its former glory to allow for its legacy to continue for generations to come.

“The sympathetic restoration, design and attention to detail has undoubtedly brought back to life a key historic building to the City of Inverness and is a prime example of how old historic buildings can and should be repurposed to create beautiful new homes and commercial spaces.”

Initially, the building was stabilised and protected through the pro-active work of the Council’s Building Standards Service before redevelopment process began. Completed by Inverness-based contractor, Compass Building & Construction Services, the reimagined Merchant House has sensitively retained such historic features.

A first-of-its-kind approach to re-development in Inverness, this includes conservation of the staircase, where a new modern-day courtyard with communal space and recycling points has been built around.  The plaque was removed and relocated to the doorway leading to the new courtyard space.

The original façade stonework was also removed brick by brick, placed into storage and then re-built in precisely the same format to ensure that the original building is preserved for generations to come. The unique nature of the building works has also helped to maintain the original character of the building, in keeping with the wider streetscape and Inverness Castle.  The slate tiles are also original.

In total, construction works have taken almost two years to finish, highlighting the timely nature of the build to ensure that the brickwork was completed exactly like for like.

The Highland Council is committed to preserving ancient buildings across Inverness, as it recognises the importance, they have on retaining the city’s cultural heritage and the potential they hold to becoming destinations that match the modern day.

Merchant House now features a mix of seven one-bed flats and one two-bed penthouse apartment, helping to address the demand for high-quality rental opportunities in Inverness.  Developed and now managed by local developer, HHA, the one-of-its-kind re-development is a prime example of upholding a building’s legacy to create a considered future.