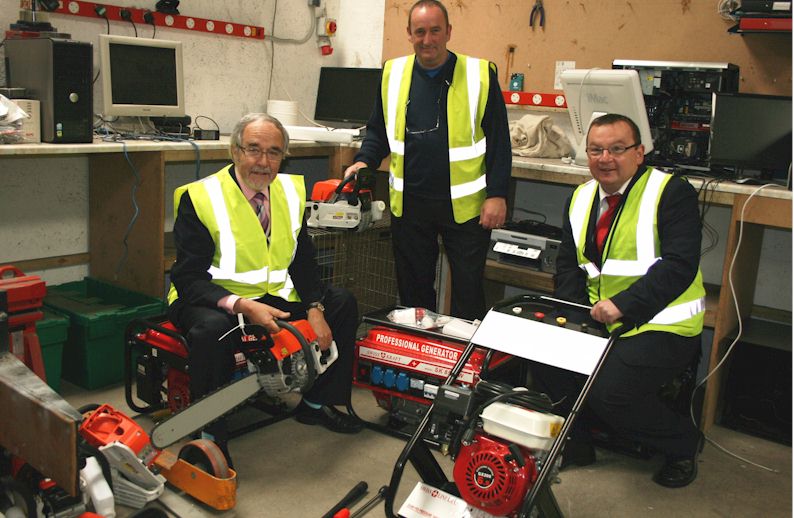 Twenty-five pieces of equipment, including chainsaws, generators and power washers, originally seized by Police from a group of itinerant traders, and that were subsequently found by Highland Council Trading Standards to fail to meet safety standards, are to be destroyed.

The equipment was seized by Police from the itinerant traders after the Police had received calls from concerned members of the public about the activities of the traders, who were reported trying to sell the equipment from the back of a van round the doors in the Nairn and Aviemore areas.

None of the equipment seized was found to comply with the strict legal safety requirements, with falsely applied CE marks, inadequate or missing instructions and safety warnings, and without the necessary documentation to verify that the equipment had been designed and manufactured to a safe standard.

Trading Standards Manager, Gordon Robb said “Machinery of this type even when manufactured to the highest standards can still present a very real inherent risk of injury. Wherever possible therefore, when as in this case, machinery falls short of the product safety requirements that would demonstrate it to be safe, the opportunity is taken to permanently remove it from circulation.”

“The source of the equipment although believed to be of Chinese origin was never discovered and those selling them appear to have had no knowledge of the legal restrictions placed on the supply of such equipment. Their subsequent failure to provide further information about their source and/or to provide the necessary documentation has resulted in our decision to destroy the equipment. The products will be crushed and recycled by Highland based recycling charity ILM Highland.”

Chairman of the Development and Infrastructure Committee, Councillor Thomas Prag, said “This is another example of how our Trading Standards team works with partner organisations to protect us all, on this occasion by removing potentially dangerous products from sale. Not only that, but local businesses will rightly recognise the value of this work in disrupting those who chose to trade unfairly.”

In order to promote future joint working with Police Scotland Trading Standards have produced a handy aide memoire for Police Scotland North Division to assist officers in identifying from the product packaging, marking and documentation whether machinery being offered for sale is potentially unsafe.

A spokesperson for Police Scotland, North Division said “Once again we are working together with our colleagues in Trading Standards to tackle criminal activity in the Highlands.  Our officers are now better informed on how to spot any potential problems and will alert Trading Standards.”

Members of the public who are approached by anyone selling such items are advised to weigh up the ‘bargain’ being offered against the potential safety risks. Consumers are urged to report any such activity to Trading Standards on 01463 228700.