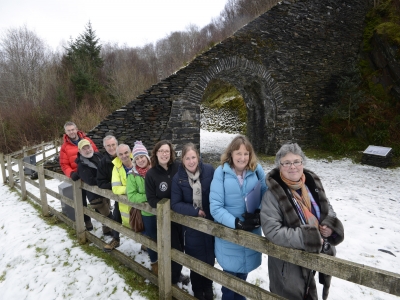 An exciting project to conserve and interpret Ballachulish’s historic slate arch has been launched this week, thanks to funding from the Heritage Lottery Fund, The Highland Council and Historic Scotland. The £277,000 project will not only consolidate the slate arch structure but also enable the local community to research its history and help create new interpretation about the arch and the village’s slate-quarrying heritage for local people and visitors.  The path to the arch, along with paths within the East Quarry, will also be upgraded.

The Ballachulish slate arch, also known as the Tom Beag Inclined Plane, can be seen from the A82 trunk road close to the village of Ballachulish.  It dates back to the 19th century when it was built to transport wagons of dressed slate from the quarry down to piers on the loch-side and to transport empty wagons back up to the quarry.

The Arch is owned by The Highland Council and Leader of the Lochaber Area Committee, Councillor Thomas MacLennan, said:  “The slate arch is of national significance as it represents the last visible structural relic from the operational history of the Ballachulish slate quarrying industry, which dates back to the late 1600s and which, at its peak, exported slate all over the world.  It is a fine example of 19th century engineering and is important not only within the context of Ballachulish but also nationally as other inclined planes in Scotland only survive as earthworks.  We are delighted to be working with the Heritage Lottery Fund, Historic Scotland and Ballachulish Community Council on this project to conserve and interpret it.”

Complementing the physical conservation works to the arch will be a range of community heritage activities aimed at gathering materials (photographs and documents etc) relating to the local slate industry as well as an oral history project which will record the memories of people associated with it (many of whom are now very elderly).  The materials gathered through the project will be made available to the public through new on-site interpretation and also in a new app and web pages.

The project will also see the upgrading of paths to the arch and within the East Quarry which will make them more accessible to people with mobility problems and families with young children.  Last, but by no means least, the project is funding a special free two-day training course for people interested in learning about traditional slate-building techniques.

Work on researching the history of the arch and the wider quarry will begin in February with physical conservations works due to start in early July.  The project is due for completion by December 2015.

Colin McLean, Head of the Heritage Lottery Fund in Scotland, said: "As time marches on, the memories of Ballachulish’s once thriving slate quarrying industry begin to fade. The Heritage Lottery Fund is delighted to support a wonderful project which will not only conserve a physical reminder of it, but will also re-engage people with their industrial heritage and provide an important record for the region."

Allan Rutherford from Historic Scotland Heritage Management said: ‘The Tom Beag Inclined Plane is a prominent reminder of the scale the slate industry based at Ballachulish. In the late 19th century Ballachulish was one of Scotland’s two slate ‘super quarries’ (the other one being at Easdale), and slates from the quarry contribute to the character of many of Scotland’s buildings. Historic Scotland very much welcomes this exciting project to both conserve the inclined plan and to interpret it, and is pleased to be able to support it through our Ancient Monument Grant scheme.’