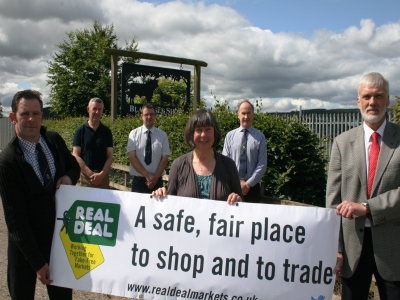 Visitors to the Black Isle Show on the 5th and 6th August will be assured of getting the Real Deal after The Highland Council and the Black Isle Farmers Society made a commitment to keep them free of fake goods.

Organisations throughout the UK have signed up to the Real Deal markets’ charter, a nationwide initiative that encourages local authority Trading Standards and market operators to work closely together and share information so that local markets, car boot sales remain free from  counterfeit goods and are a safe environment in which to shop and trade. The agreement is the first of its kind in the Highlands and the furthest North for the Real Deal Scheme.

Gordon Robb, Trading Standards Manager at The Highland Council, said: “We are fortunate in Highland not to suffer the levels of criminality relating to the sale of fake and Trade Mark offending goods that often plague markets in other parts of the country. Such cases are certainly not unknown however and we need to work with business to ensure consumers can continue to have a high level of confidence when buying from our markets and car boot sales.  The Black Isle Show organisers have always been happy to work with us to promote fair trading by those who operate at the show and we are therefore delighted that they have agreed to further demonstrate their commitment to protecting consumers by signing up to the Real Deal.”

Stringent vetting procedures have been introduced by Highland Council’s Trading Standards service and the Black Isle Farmers Society to ensure counterfeit goods are not sold at events organised by the Society. The Real deal logo is a sign for good practice and is testament to the amount of hard work that has gone in to eradicating traders selling counterfeit goods such as clothing, tobacco and DVDs. The logo will be displayed at the Black Isle Show which indicates to visitors and the traders selling at the Show that the Society abides by the terms of the charter and in agreement with Highland Council Trading Standards.

Rod MacKenzie, Secretary and Treasurer of the Black Isle Show Farmers Society adds: “As a committee we are constantly striving to improve not only the Showground and its facilities but also the overall experience for reputable traders/exhibitors and members of the public.  By signing the Real Deal Charter, which will be displayed on our Showground premises, we can assure visitors and reputable stall holders that this is a fake-free zone.  This also sends clear message to counterfeit sellers who may visit the area that they are not welcomed on the Showground”.

Patricia Lennon, Campaign Director of the Real Deal, said:   "It is wonderful that such an iconic event as the Black Isle Show is joining the Real Deal scheme. It goes to show that organisers of any trading event, whatever its scale or nature, can take a stand against the dishonest trade in fake goods, which causes so much harm to consumers, local businesses and communities.

“We would like to thank the Black Isle Farmers Society and Highland Council Trading Standards Service for working together to spread the Real Deal message to this northerly and very beautiful part of the country.”

The Real Deal initiative is supported by a wide range of UK public and private sector organisations that are committed to keeping markets fake-free. In Scotland, these include Trading Standards Scotland, the Scottish Business Resilience Centre and the Scottish Anti-Illicit Trade Group.

Consumers or businesses can also report fake goods and those who are supplying to Highland Council Trading Standards online by going to the Council’s website at: http://www.highland.gov.uk/counterfeits